February: all about pears

Woop – the Clapton Pot is now fully launched! This time we were better prepared and had less to do between courses, so we were able to really join in on the conversation (although I wonder whether both of us should swap seats before dessert so we can chat with each of our guests…).

Joining us were our friend Emily of yeah! Hackney and Stephen from Crouch End, a slightly confused but happily surprised Ursula, Laura and her friend Robbie, who turned out to be a policy officer (and not, as I had told a few of my neighbours amusedly, one of our local coppers), and poet Sam, who despite calling himself Angry Sam, happens to be perfectly friendly! 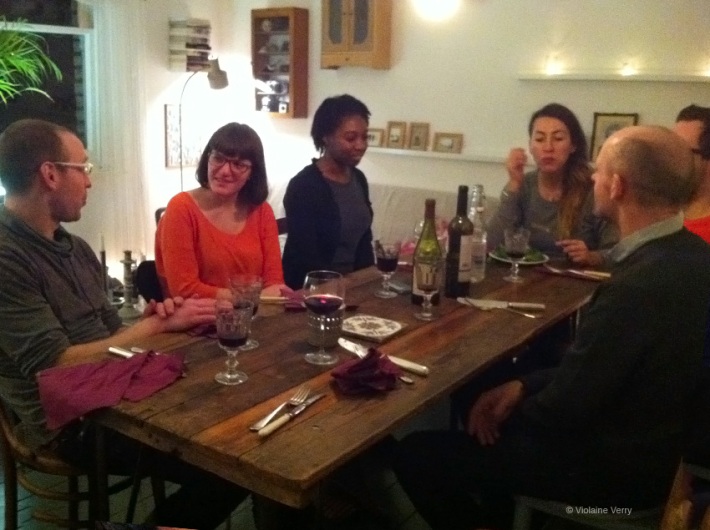 On the menu this month:
– carpaccio of fennel and conference pears on a bed of watercress, seasoned with a grain mustard and maple syrup vinaigrette
– sun-dried tomato and polenta tart, grilled portobello mushroom sprinkled with walnuts, Puy lentils and sun-dried tomato jus
– Turkish pears poached in red wine, Madagascar vanilla and black pepper, and yoghurt sprinkled with poppy seeds

I’m not too sure the presentation of the main course was as good as it could have been (it’s a bit tricky if you want to serve while it’s hot), but in any case it was delicious. Speaking of presentation, the old plates we used for our starters and dessert used to be my great-grandmother’s who lived in the middle of France – she’d be so happy to know they’re still in use!

The Madagascan vanilla was the last pod of a bunch I purchased in Madagascar – can’t believe I failed to even mention it to our guests…! Admittedly in the second batch of wine sauce we made, we had to resort to bought vanilla extract. And in spite of what the lady in Ridley Road market said, it turns out the slightly exotic-looking Turkish pears aren’t quite as flavoursome as good old English conference pears…

In the end it went so well I was still buzzing when I went to bed and couldn’t sleep for some time. Here’s hoping the March edition of the Clapton Pot is just as fun!

(Apologies for the poor quality of the above pictures, taken with my phone; I’ll be adding more when our guests send them through).

*** Addendum***
More pics below from Robbie, who also turns out to be an avid food blogger: you can read his review of The Clapton Pot on his North East Eats blog. It’s all rather flattering – thanks Robbie!

And finally we’ll leave you with one last picture courtesy of Emily, which pretty much sums up the atmosphere on the night!